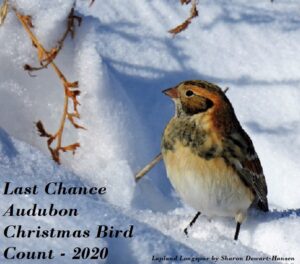 Since 1973 Last Chance Audubon has participated in this national event to collect data on wintering bird populations. The Helena area is divided up into nine quadrants and during a single day in December teams disperse to document both species and numbers of birds, concluding with a potluck to swap stories about the day’s sightings.

Christmas Bird Count 2020 is in the books! And it was the year of waterfowl!  We matched or exceeded all-time count numbers for 7 different species of waterfowl – Cackling Goose, Wood Duck, Green-winged Teal, Redhead, Lesser Scaup, Bufflehead, and Common Goldeneye!  Great counting everyone!
Overall, 30 participants and 6 feeder watchers tallied a total of 65 species on the count, which is actually above our 17-year average of 63!  The total number of birds was below our average of 11,195, but not by much (9,786).
Other highlights include one new species seen during count week – Lesser Black-backed Gull.
A single Mountain Bluebird was seen, which is only the 2nd time that species has been counted on the Helena CBC.
Three Wild Turkeys were counted, which is also only the 2nd time counted ever.
Thanks so much for everyone’s involvement in the CBC this year.  LCAS wishes that we could have invited everyone to participate in this year’s count, but logistically it could not be done safely. However, I’m happy we were still able to do the count even under COVID conditions.  Hopefully next year will can return to a more normal CBC!
Happy Birding in the New Year!
Coburn Currier

Questions regarding the count can be directed to Coburn Currier at clcurrier@hotmail.com